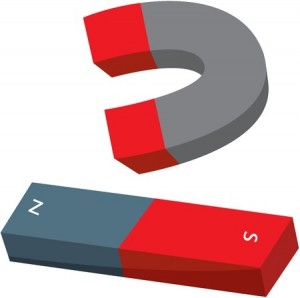 Even though we design some of the world’s best industrial magnet supplies, it’s easy to overlook just how amazing magnets are in the first place. Show a child a magnet for the first time and you’ll see a fascinated look on their face. While we may have grown used to the power of magnets, most people actually have no idea how they work.

It can be difficult to wrap your head around some of the fundamentals of magnetism. Part of the reason for this is that the power doesn’t really lie in the magnet itself, but in the magnetic field surrounding it and the force that it exerts.

The “lines of force” in a magnetic field always exit to the north pole and enter through the south pole. For this reason, the same holds true for magnets as in Paula Abdul’s 1988 hit, “Opposites Attract”. It’s also true, on a larger scale, for planet Earth, which has north pole, a south pole, and a magnetic field of its own.

The magnetic field surrounding a magnet attracts ferrous objects, such as iron and steel. While the science is quite complicated, this attraction is due to the movement of electrons.

We’ve really only scratched the surface of what makes magnets work, and we’ve also made it sound much simpler than it actually is. As with all scientific phenomena, there is plenty more to be discovered in the field of magnets. Stick with the IPES International blog for more information on magnets and how we apply them to industrial solutions every day.